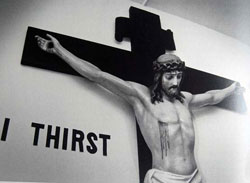 “In the Silence of your Heart, You will Hear – I Thirst”

Do you really know the living Jesus – not from books but from being with Him in your heart? Have you heard the loving words He speaks to you? Ask for the grace, He is longing to give it. Until you can hear Jesus in the silence of your own heart, you will not be able to hear Him saying “I thirst” in the hearts of the poor.

A year before she wrote this passage as part of a personal letter in 1995 to her spiritual children and the sisters , fathers, and brothers of her religious family, Mother  Teresa traveled to America to speak at the National Prayer Breakfast in Washington, DC, on February 3, 1994. Sitting within a few feet from the dais were President Bill Clinton, Hillary Clinton, Vice President Al Gore and Tipper Gore.

In part this is what the stooped diminutive figure of the saintly nun, barely five foot tall in her homespun white sari with the blue fringe and well-worn sandals, said to the powerful, well-groomed elites of  America:

When He was dying on the Cross, Jesus said, “I thirst.” Jesus is thirsting for our love, and this is the thirst of everyone, poor and rich alike. We all thirst for the love of others, that they go out of their way to avoid harming us and  to do good to us. This is the meaning of true love, to give until it hurts.

But I feel that the greatest destroyer of peace today is abortion, because it is a war against the child, a direct killing of the innocent child, murder by the mother herself.

And if we accept that a mother can kill even her own child, how can we tell other people not to kill one another? How do we persuade a woman not to have an abortion? As always, we must persuade her with love and we remind ourselves that love means to be willing to give until it hurts. Jesus gave even His life to love us. So, the mother who is thinking of abortion, should be helped to love, that is, to give until it hurts her plans, or her free time, to respect the life of her child. The father of that child, whoever he is, must also give until it hurts.

By abortion, the mother does not learn to love, but kills even her own child to solve her problems.

Any country that accepts abortion is not teaching its people to love, but to use any violence to get what they want. This is why the greatest destroyer of love and peace is abortion. 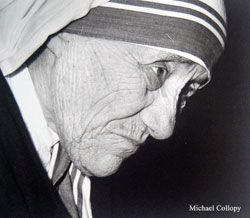 According to Wall Street Journal columnist, Peggy Noonan, who attended the prayer breakfast in 1994, while most applauded Mother Teresa’s bruising indictment of legal abortion, “the president and first lady … were not applauding. Nor were the vice president and Mrs. Gore. They looked like seated statues at Madame Tussaud’s. They glistened in the lights and moved not a muscle, looking at the speaker in a determinedly semi-pleasant way.”

On September 13, 1997, Hillary Clinton attended the funeral Mass of Mother Teresa in Calcutta. I wonder if these parting words Mother spoke at the Washington prayer breakfast meeting three years before haunted Mrs. Clinton:

I will tell you something beautiful. We are fighting abortion by adoption – by care of the mother and adoption for her baby. We have saved thousands of lives. We have sent word to the clinics, to the hospitals and police stations: “Please don’t destroy the child; we will take the child.” So we always have someone tell the mothers in trouble: “Come, we will take care of you, we will get a home for your child.” And we have a tremendous demand from couples who cannot have a child – but I never give a child to a couple who have done something not to have a child. Jesus said. “Anyone who receives a child in my name, receives me.” By adopting a child, these couples receive Jesus but, by aborting a child, a couple refuses to receive Jesus.

Please don’t kill the child. I want the child. Please give me the child. I am willing to accept any child who would be aborted and to give that child to a married couple who will love the child and be loved by the child.

If we remember that God loves us, and that we can love others as He loves us, then America can become a sign of peace for the world.

From here, a sign of care for the weakest of the weak – the unborn child – must go out to the world. If you become a burning light of justice and peace in the world, then really you will be true to what the founders of this country stood for. God bless you!

Mother Teresa’s canonization yesterday filled my soul with tremendous joy. I watched all the special programs on EWTN which brought back so many memories. Of course most of us knew the Albanian-born girl from Skopje, Macedonia who adopted the name, Mother Teresa of Calcutta, was a living saint.

In the early ’90s I was so excited about seeing the living saint in person that I traveled to England to see her at an international pro-life conference in Brighton, a seaside city located on the southern coast of England. Also at the conference was the highly renowned French geneticist, Dr. Jerome Lejeune, who discovered the extra chromosome 21 gene that causes Down’s Syndrome. Dr. Lejeune was a staunch, indefatigable defender of unborn life who died in 1994. Pope John Paul II conferred the title of “Servant of God” on the saintly physician, the first of four steps in the process of canonization.

Well, I did get to see Dr. Lejuene at the conference and another well known public figure, Princess Diana of Wales, who had a great respect for Mother Teresa. Unfortunately Mother came down with a serious illness and could not travel to England.

The highlight of my trip was meeting with the American pro-life leaders in Brighton, Joe Wall and Cathy Cavanaugh O’Keefe, who were in the seaside city to lead an Operation Rescue type direct action to draw attention to abortion during the international pro-life conference.      In significant ways, Mother Teresa inspired my deep commitment to the pro-life cause including efforts to directly shut down abortion centers.

During the ’90s, Mother Teresa single-mindedly pursued the steady expansion of the charitable works of the Missionaries of Charity to all corners of the world including the American hemisphere.

Closer to home I visited the Missionaries of Charity sisters at a soup kitchen and transient men’s residence in Tijuana where I was put to work doling out food and washing pots and pans with other volunteers and the sisters. The authentic joy and love the sisters displayed for the indigent men and boys in their charge was, to say the least, “contagious” and exhilarating. 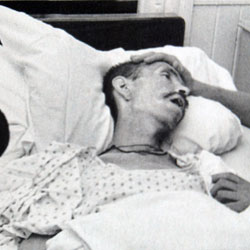 In the early ’90s the AIDS crisis was raging all over the United States especially in New York, Los Angeles, and the San Francisco Bay Area where I lived at the time. The City refused to shut down the “gay” bathhouses and places in the Castro District where promiscuous, casual sex between men was prevalent with the city’s acquiescence.

Mother Teresa decided to open up shop in San Francisco in the middle of the chaos and the fear that abounded at the time concerning the growing spread of AIDS. At the time AIDS sufferers were considered the lepers in our western society. I visited the Missionaries of Charity AIDS hospice and was shocked by the terrible  manifestations of the disease that was devastating the local San Francisco community. These patients were receiving the most loving and comforting care and attention by the sisters and volunteers as these men awaited their imminent deaths.

While I never had the privilege and honor of meeting the saint of the Calcutta slums, I’ve been very blessed to have known the good fruits of her magnificent work. Most of us hold dear in our hearts what she once said that “God has not called me to be successful. He has called me to be faithful”. Today there are over 5,600 religious members of the Missionaries of Charity (men and women) and they are active in over 139 countries.

The Lord called her to do great things and He blessed her because she was faithful.

Thank you, Mother, for your heroic witness! You once asked us for our prayers for your work. You will probably smile when we say the same prayer we now ask of you, St. Teresa of Calcutta:

“Pray for us that we may not spoil God’s work”.

Please help lead us from Heaven in this terrible battle in America to end the eternal curse of abortion so that our nation may once again be a “burning light of justice and peace in the world”. We love you!