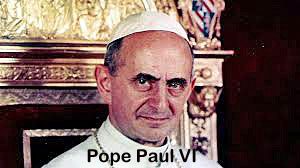 [Author Mary Eberstadt’s lecture at the University of Notre Dame should be read by every Catholic concerned about the breakdown of marriage and family life and the deeply entrenched abortion culture in the United States. 2018 is the 50 year anniversary of Humanae Vitae, arguably the most important papal encyclical letter on moral theology in the modern era promulgated by Blessed Pope Paul VI who will be canonized in October this year. Phil Sevilla, Editor]

Author Mary Eberstadt told students at the University of Notre Dame Tuesday that a 50-year-old document on contraception is critical to understanding the state of contemporary culture.

Eberstadt, a senior researcher at the Faith and Reason Institute, spoke at Notre Dame’s Center for Ethics and Culture, explaining that the prophetic message of Pope Paul VI’s 1968 encyclical Humanae Vitae has become a reality.

“Contraceptive technology, as Paul VI foresaw, opens a Pandora’s box of mischief in which the stronger have the advantage,” Eberstadt told Notre Dame students March 20.

“For some while now, it’s been apparent that the sexual revolution that began in the 1960s bids fair to become one of the most formative disruptions in human history,” Eberstadt argued. “It’s having massive repercussions across the world – microcosmic, macrocosmic, moral, religious, political, and otherwise.”

Eberstadt mentioned an article she wrote a decade ago, published in the journal First Things, at the 40th anniversary of Humanae Vitae. “It’s the same conclusion that was visible ten years ago, and that will remain visible ten, or one hundred, or two hundred years from now,” said Eberstadt. “It’s simply this: The most globally reviled and widely misunderstood document of the last half century is also the most prophetic and explanatory of our time.”

Fifty years ago, Eberstadt said, supporters of contraception argued that abortions and births to unmarried parents would diminish as a result of reliable birth control. Rather, she said, they have increased.

“Far from preventing abortion and unplanned pregnancies, contraception’s effects after the invention of the pill ran quite the other way: Rates of contraception usage, abortion, and out-of-wedlock births all exploded simultaneously.”

Eberstadt argued that abortion rates have increased as a result of the sexual revolution of the 1960s, and contraception in particular. She offered a series of proofs to support her claim.

“By making the birth of the child the physical choice of the mother, the sexual revolution has made marriage and child support a social choice of the father,” she said, citing analysis by George Akerlof, Janet Yellen, and Michael Katz.

She next argued that contraception promotes abortion-on-demand because it encourages career plans that depend on delaying children until later in life. If an unexpected pregnancy interrupts such plans, she said, abortion is more likely to be considered.

“Legal reasoning justifying freedom to contracept has been used to justify freedom to abort. You can’t have one without the other.”

Eberstadt mentioned that support for contraception is not universal.

She said many African nations have “resisted the attempts of reformers to bring them into line with the secular Western sexual program.”

In contrast to Africa’s resistance to contraception, Eberstadt noted the demographic decline of Japan, where, she said, loneliness is pervasive, especially among the elderly, who often die alone.

As the destructive results of the sexual revolution become more obvious, Eberstadt said that many Protestant Christians have reconsidered prior positions on contraception.

“More and more people outside the Church are concluding from that same wreckage that Catholic moral teaching has called many things right, not only as of Humanae Vitae, but for the preceding millennia of consistent teaching.”

In conclusion, Eberstadt said that while people in the world will continue to oppose to the Church’s stance on contraception, the truth of Humanae Vitae will not stop pointing towards the destruction of the sexual revolution.

“To discern the record of the last half-century is to see that the Catholic Church was right to stand as a sign of contradiction to the devastation the sexual revolution would wreak; that accommodating top the revolution has been an epic fail for the churches that have tried it; and that the truths of Humanae Vitaeand related documents burn all the more brightly against the shadowy toll of the destruction out there.”

“Be proud in the right way of your Church for getting one of the most important calls in history right,” Eberstadt encouraged. “And never let anyone put a kick-me sign on you for being an unapologetic Catholic.”