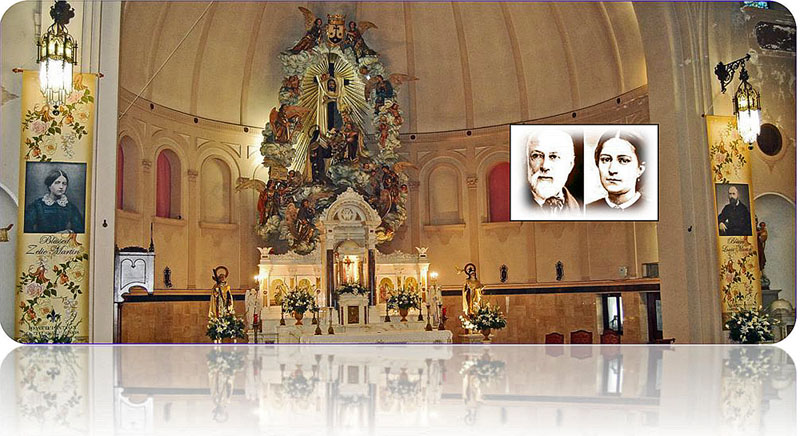 Last Sunday,  October 18th, my family attended a very special Mass at the Basilica of the Little Flower on Zarzamora, a magnificent Carmelite church, a true treasure in the city of St. Anthony. In Rome the same day, the Pope celebrated a similar Mass in honor of a French couple who died in the late 19th century.

Louis and Zelie Martin were the parents of one of the most beloved modern day saints of our time, St. Therese of Lisieux. Zelie died young at 45 succumbing to cancer, leaving five young daughters to the care of her pious husband, Louis, who offered all his daughters to the service of God, dying at 70 after three years of terrible suffering with the onset of cerebral arteriosclerosis and two paralyzing strokes.

The Church elevates certain souls who lived exemplary lives of heroic virtue and extraordinary fidelity to God and love of their neighbor. When a soul is canonized, the faithful are called upon to remember his or her witness and holy example by commemorating a day in honor of the saint recorded in the annual (canon) calendar of the Church as a way of giving  thanks to God as we joyfully celebrate the person’s life and example of sanctity hoping that by their example we too can persevere in faithfully following the will of Almighty God.

Louis and Zelie Martin were models of heroic virtue and child-like docility to God’s will. They  lived  a life together in marital fidelity and spousal devotion to one another overcoming  many tribulations and heartbreaking ordeals to attain profound spiritual refinement and create in their 19th century French family of father, mother, and  four daughters, an extraordinary crucible of saints.

In this era of the post-sexual  revolution of the 1960s that Judge Robert Bork called the age of “radical individualism” and what St. John Paul II denounced as “subjectivism” and moral relativism, we turn to saints like the members of the Martin family to find solace and certainty that living saintly lives is never antiquated or “retrograde”  and there is a way forward from the cultural storms today sweeping many souls towards a turbulent moral whirlpool of sexual promiscuity, infidelity, and perversion.

Let us offer this prayer to celebrate this precious gift of our Church which has given us models of holy marriage and parenthood – for ourselves, our families, and many broken families and wounded souls who have turned away from living virtuous saintly lives. Liberation and freedom can only come from living and loving truth who is the WORD and in Him is life and the light of men. (Jn. 1:1-5)

Louis and Zelie Martin, you who, in your life as a couple and as parents, have given witness of an exemplary Christian life by fulfilling the duties of your state in life and practicing the evangelical virtues, we turn to you today… Let the example of your unfailing trust in God and your abandonment to His will, in joys but also through the trials, sorrows, and suffering with which your life was filled, encourage us to persevere in our daily difficulties and to live in joy and Christian hope. Intercede for us with our Father that we may obtain the graces of which we have such need in our everyday life on earth and that, like you, we may reach eternal happiness. AMEN.
(From the Little Flower Basilica bulletin)