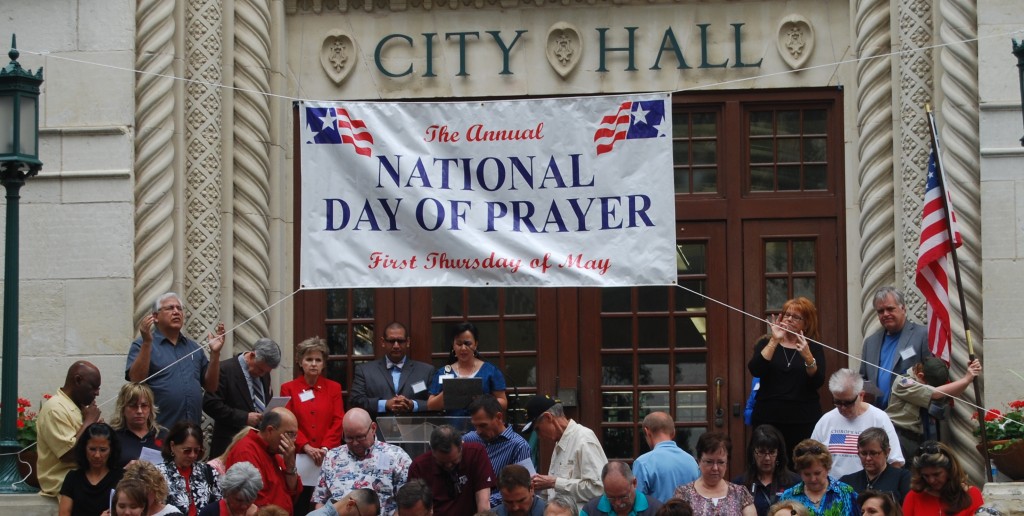 National Day of Prayer Rally at City Hall
May 1st, 2014

Mrs. Terelyn Santos, parishioner of St. Pius X, was one of the prayer leaders at the rally held last Thursday on May 1st  at noon in front of City Hall in downtown San Antonio. Over a  hundred attended the rally at City Hall, while similar public rallies were held on the same day  around the nation to celebrate the National Day of Prayer, an annual tradition. The theme this year was “One Voice, United in Prayer,” where all people of faith unite to place our trust in our Creator, the supreme ruler over all governments, authorities and men. (Rm. 15:6) 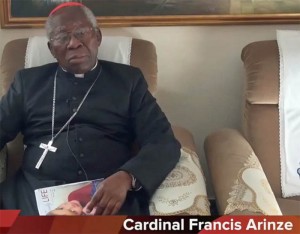 Even Children Know the Answer

In an interview last week at the Vatican, highly esteemed Francis Cardinal Arinze from Nigeria, Prefect Emeritus of the Congregation for Divine Worship and the Discipline of the Sacraments, expressed his strong views about Catholic politicians who promote abortion. In answer to the question whether Catholic politicians who vote for and promote abortion should be permitted to receive Holy Communion, the Cardinal responded:

“Do you really need a cardinal from the Vatican to answer that? Is that really a difficult question?” He explained that even children preparing for their First Communion know the simple answer.

“Explain it to them,” he said. “They will ask you, ‘What is abortion?’ Tell them what it is. It is killing a child not yet born in the mother’s womb. And then tell them if a person is for that, and says that he will continue to support the killing of such children, should such a person receive Holy Communion?”

“These children did not study dogmatic theology at the Catholic University of America or at the Gregorian university in Rome,” said Arinze. “And they saw immediately that killing an unborn child is wrong!”

The Code of Canon Law of the Catholic Church states that those who “obstinately persist in manifest grave sin are not to be admitted to Holy Communion.”

Cardinal Arinze expressed to the interviewer from LifeSiteNews that he has no patience for politicians who say that they are personally opposed to abortion, but are unwilling to impose their views. “It isn’t my view. It isn’t my law. It is God’s law. Thou shalt not kill. Anyway, the person making that argument, if he had been killed in his mother’s womb, he would not be there to make the argument. The matter seems to me simple and straight.”

In December last year, Raymond Cardinal Burke, Prefect of the Supreme Tribunal of the Apostolic Signatura, the Church’s highest court, explained during an EWTN  interview that Catholic pro-abortion politicians like Nancy Pelosi (D-CA.) and John Kerry (D-MASS.) should be denied Communion.

He elaborated that it is necessary to protect the Sacrament of the Holy Eucharist from “being profaned, being violated by someone receiving unworthily,” someone “who knows that he or she is unworthy and yet presumes to come forward and to take the Holy Eucharist.”

To further explore Cardinal Burke’s clear teaching of Canon 915 and the serious reasons for the Church’s discipline, please review especially his conclusions in The Discipline Regarding the Denial of Holy Communion to Those Obstinately Persevering  in Manifest Grave Sin.

Another Catholic Bishop, Thomas Paprocki of Springfield, Illinois, quite recently  invoked Canon 915 to deny Communion in his diocese to U.S. Sen. Dick Durbin, D-IL., who has a 100% rating from leading abortion advocate organizations, NARAL Pro-Choice America and Planned Parenthood.

Dear Catholics…. We Have a Problem with Sylvia Matthews Burwell

Burwell was recently nominated by President Obama to succeed Kathleen Sebelius as the new Secretary of Health and Human Services. Sylvia Burwell’s liberal educational and professional background will guarantee she will follow closely in the footsteps of Sebelius, but perhaps she will be more adept and skillful at negotiating political minefields in the implementation of ObamaCare if that is at all possible. Let’s hope not.

Her early engagement in politics included stints serving as an aid with Michael Dukakis’ failed presidential campaign, followed by 8 years working at Bill Clinton’s White House, rising to the position of Deputy Chief of Staff,  then for a decade, head of the Bill and Melinda Gates’  overseas population control foundation, which has contributed billions of dollars exporting abortion and birth control to poor nations in the Third World. A year ago she was plucked to be Obama’s Director of the White House Office of Management and Budget. She is very well connected within the liberal elite circles and  has been a member of the Aspen Strategy Group and Council on Foreign Affairs.

As CEO for the Gates Foundation’s Global Development Program, Burwell oversaw the Gates’ family planning agenda primarily funding Planned Parenthood International and the UN Fund for Population Activities, an organization complicit in China’s national policy of forced abortion and sterilization. “In July 2012, Gates raised $2.6 billion for population control measures at a London-based summit, offering more than half-a-billion of the foundation’s own dollars.” (LifeSiteNews, 4/11/2014)

What we might expect from Sylvia Burwell is possibly a much more skilled political operative and administrator than Sebelius. While Catholic Sebelius may be forever linked to the failed initial roll-out of ObamaCare, Burwell may be the partner President Obama is hoping will fix it before the mid-term elections next November.