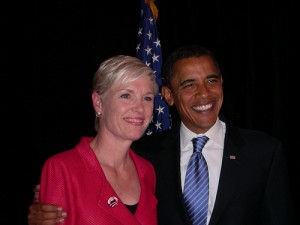 Well, it’s official. At the Democratic Party convention last week, Planned Parenthood President Cecile Richards and President Barack Obama exchanged vows, promising to be true to one another for better or for worse … well, at least until Election Day, Tuesday, November 6th. Nancy Keenan, President of NARAL Pro-Choice America, stood by as bridesmaid.

Actually President Obama plighted his troth to Planned Parenthood in March this year during his special message recorded for Planned Parenthood supporters, promising to provide his full support and to stand behind them with the full weight of his office.

In his message, President Obama echoed the hackneyed falsehoods rehashed by Cecile Richards that PP is a comprehensive health care provider where cancer screening is provided extensively at their centers. According to their last annual report (2009-2010), the largest provider of abortion in the country, Planned Parenthood Federation of America, committed 329,444 abortions, provided 841 adoption referrals, and 31,098 prenatal related services. (Source: Live Action Blog, 1/3/2012)

How about mammograms (breast cancer screening), touted again and again by President Obama and Cecile Richards as a valuable service provided to the community by the largest abortion chain? According to Live Action, a pro-life investigative action organization that has repeatedly uncovered fraud and criminal activity at Planned Parenthood centers, their undercover research  based on calls to thirty Planned Parenthood locations encompassing twenty-seven states revealed that no mammogram screening services are provided at PP offices. Some provide referrals and nothing more.

Planned Parenthood has also been embroiled in congressional investigations into the abortion provider’s involvement in defrauding the government, misusing Medicaid and Title X funds, widespread failure to report criminal activity such as statutory rape, child sexual abuse, and sex trafficking at their facilities.

So what are we to make of this?

Planned Parenthood’s political clout spreads across the American landscape like an octopus’s arms, stretched around the three branches of government and American press. Eugenicist and libertine Margaret Sanger who founded the organization would be amazed that her offspring today is a billion dollar enterprise.

What can we do about it?

The electorate must deny Barack Obama another four years in the White House this November.
The defeat of Obama and his allies in Congress would spell disaster for Planned Parenthood. Please do everything you can to assist and ensure the election of good God-fearing men and women who are running for federal, state, and county – executive, legislative, and judicial – offices in the 2012 General Election.

We need many volunteers to help with these campaigns! Can you help stuff mailing packets
for an hour or two either at a central location or take the campaign material home and do it
as time permits? Can you spend an hour or two block walking and dropping off packets at
designated neighborhoods? Or a hour or two at the phone bank calling voters?

There is much to do in a short time. The General Election is only 8 weeks away. Your assistance
is urgent. Volunteers are needed to stuff 70,000 packets over the next two weeks. Please
step forward – “many hands make light work” – and there are never enough hands.

Please contact Mrs. Darlene Jimenez as soon as possible to contribute whatever time you can to
help a worthy and able group of men and women who will defend our Catholic Christian values in government.