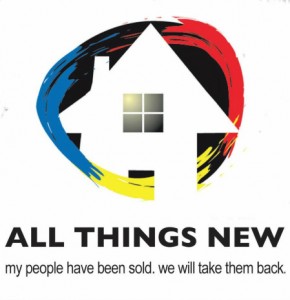 Believe it or not, human trafficking is a booming “business” in Texas and all over the U.S. In the United States, 300,000-400,000 minors every year are at risk of being trafficked.  Worldwide, the business of trafficking human beings – men, women, and children,  is now estimated at $32 billion. 21st century slavery, torture, murder, rape, and trading of human beings in the pursuit of profit  is an abominable practice today as slavery was in the American colonial period of the 18th century.

Linda Caswell should know. Victimized when she was a young woman in New Orleans, drawn by drugs and cash into a hellish lifestyle, she was kept in bondage, living in terror under the threat of torture and death. She escaped and found solace and her calling when she converted to the Christian faith. Two years ago she entered the Catholic Church.

Before moving a few years ago to establish her headquarters in San Antonio, Linda worked in prison ministry, established other safe houses, trained as a nurse, and worked as the Oklahoma director for Concerned Women for America. She believes strongly in her mission to establish safe houses here in San Antonio for abused women brutalized and dehumanized by the sex trade. There is a special bond between women who have been sexually exploited.

The first All Things New safe house under Linda’s supervision in San Antonio is a former convent and crisis pregnancy home in the vicinity of Our Lady of Guadalupe parish on El Paso Street. The peaceful setting of the chapel on the second floor brings the women together for prayer. She would like to start a home for men as well.

The influx of immigrants coming in from south of the border has brought not only people fleeing from economic hardships and violence in Latin American countries but also desperate souls seeking asylum in the United States coming from other continents like Africa and the Middle East rife with war-ravaged conflicts, involuntary servitude and slavery, cultural practices where destitute parents sell their own children to survive from day to day.

The six women living at the All Things New safe house in San Antonio are from Ethiopia. Two of them are expecting and are due to give birth in the next two months. One has a beautiful newborn whose radiant smile lights up the whole home. Two more women are expected to arrive this week to share tight quarters at the home (much better than the facilities at the women’s detention center). These women have suffered tremendous hardships and inhuman, barbarous conditions, some for many years.

Some of the women know some English. A volunteer with experience teaching English as a second language would be greatly appreciated.

For more information about the All Things New ministry, please go to: http://www.allthingsnewus.com/

Please pray for the ministry of All Things New and for the healing and the restoration of women and children living at the home in San Antonio.

You can send your monetary donations to Darlene Jimenez or Phil Sevilla. Checks payable to All Things New Inc., a 501C3 non-profit corporation. Your donations are tax-deductible. Receipt available upon request. We can arrange to pick up your donation and any household goods you have to offer.