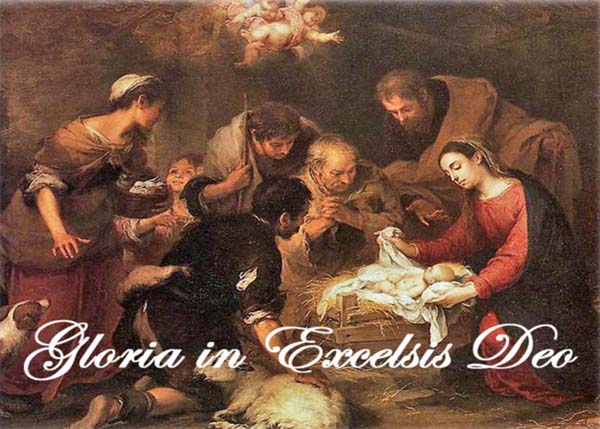 We wish you a very Merry Christmas and Happy New Year!

From a sermon by St. Augustine, Office of Readings, Second Reading, December 24th:

Awake, mankind! For your sake God has become man. Awake, you who sleep, rise up from the dead, and Christ will enlighten you. I tell you again: for your sake, God became man. 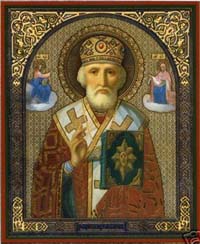 St. Nicholas of Myra and the Origins of Santa Claus

Most Catholics have heard of St. Nicholas whose feast day is on December 6th. What many Catholics don’t know are historical facts about this Eastern (Greek) Catholic saint who lived in the 4th century. His life and public witness greatly influenced the course of Church history and the enduring traditions we have come to celebrate during modern day Christmas.

Nicholas was raised in a wealthy family in Patara, a maritime city in Lycia on the coast of the Mediterranean Sea (now in Turkey). His parents died when he was young, leaving him with a sizable fortune. Endowed with religious fervor at a young age, he was brought up by his uncle who was a bishop and Nicholas was elevated to the office of Bishop of Myra shortly after his pilgrimage to Palestine and Egypt.

While Catholics, Orthodox,  and some Christian denominations today are aware of the place of honor that St. Nicholas has held in the hearts of Christians everywhere as handed down through the centuries to the modern era, many do not know about the significant role played by St. Nicholas and a few of his great contemporaries such as St. Athanasius and other Catholic bishops who defended the purity of Christian doctrine at the first ecumenical council in Nicea in 325 A.D. against the savage attacks of the Arian heresy which denied the divine nature of the second person of the Holy Trinity. Hillaire Belloc describes the Arian heresy as the first of the “great heresies”, one which nearly destroyed the Church, a most terrible protracted attack hacking away at the roots of the Church founded by Jesus Christ.

Thanks to these early fathers of the Nicean Council, we Catholics today continue to profess the pristine fullness of our faith preserved in the Nicene Creed. St. Methodius of Constantinople later wrote that “thanks to the teachings of St. Nicholas, the metropolis of Myra alone was untouched by the filth of the Arian heresy, which it firmly rejected as a death-dealing poison.”1 Nicholas suffered imprisonment during the period of severe persecutions against the Christians in the reign of the tyrannical Diocletian.

The historical popularity of St. Nicholas at Christmas time grew throughout the centuries as stories of his extraordinary acts of Christian charity spread throughout the world. There was a family in Patara with three unmarried daughters who fell on hard times. Destitute, the father was not able to provide a dowry for his daughters and he was resigned to give them up to a life of bondage and debasement. St. Nicholas took a purse of gold and anonymously tossed the money into the father’s open window at night. The eldest daughter was able to marry and soon after the saint did the same twice more. The two other sisters had dowries to marry. The grateful father discovered his family’s secret benefactor and stories of the saint’s similar acts of kindness and affection for young children spread throughout Europe.

In 1034 A.D. Myra was invaded by the Saracens. The citizens of Bari (Italy) brought the relics of the saint to their city where his bones are interred. Pope Urban II was present at the enshrining of the church built for the relics and the saint’s popularity continued to spread with stories of prodigious favors granted through the intercession of St. Nicholas.

Many nations and cities honor the saint as patron including Greece, Russia, and many cities in Germany, Italy, Austria, Belgium, the Netherlands. He is the patron of mariners, merchants, bakers, travelers, and children. The feast day of St. Nicholas on December 6th was honored by many Christian communities and states in Eastern and Western Europe as early as the 6th century.

The early Dutch settlers of the 17th century who landed in the New Amsterdam colony located in New York state knew St. Nicholas as Sint Klaes or Sinterklaas, later translated to Santa Claus. A historian of the New York Historical Society, Charles Jones, wrote in 1954 that the modern American version of Santa Claus was a creation of 19th century patriots.2

The Germans of colonial period Pennsylvania faithfully observed the feast of St. Nicholas but later the English tradition of Father Christmas, a secular adaptation of gift giving and celebration at Christmas time grew in popularity in the American states by the 19th century. Father Christmas as gift giver was popularized in 16th century England during the Reformation after King Henry VIII outlawed traditional observances of Catholic feast days. Prior to the reformation in England, hundreds of churches were dedicated to St. Nicholas, attesting to his popularity in medieval England. Father Christmas first appeared in the 15th century carol, “Hail, Father Christmas, hail to thee!” Historically, the antecedents of Father Christmas do not spring from St. Nicholas but go back to the days of Roman England and the Saxons celebrating harvests and the arrival of seasonal celebrations not rooted in Christian traditions.3  The Reformation in other European countries also suppressed saints and feast days, particularly St. Nicholas’.

By the early 1800s the modern caricature of Santa Claus became more prevalent in Europe and 19th century America. The jolly elf image with a red nose and ample girth and white beard in a red suit was first popularized in the 1810 painting by Alexander Anderson published by the New York Historical Society and a 1823 poem, “A Visit from St. Nicholas” now known as the “Night before Christmas”.4

While Christmas may be a joyous time of gift giving, family celebrations, and charitable works, Catholics should acknowledge first and foremost that the reason for our “joyful celebration is the coming of our salvation and redemption” in the person of the infant Jesus and our cherished traditions at Christmas time started long ago with a saint, Nicholas of Myra, who faithfully followed his sovereign King by giving new life to the downtrodden through his generosity and his fearless defense of the truth during the very dark days of the most poisonous heresy in history that took hold of the Catholic Church.