↓
Home Home ↓
Skip to primary content
Skip to secondary content
Home→General Politics→When the righteous cry for help, the Lord hears. Pray for the Elections Log in

“When the righteous cry for help, the Lord hears”
by
Phil Sevilla 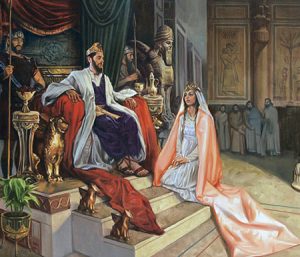 In the book of Esther, the great King Ahasuerus reigned over many provinces from India to Ethiopia. He elevated the beautiful maiden Hadassah (Esther) to be his queen. He did not know she was a Jew. The King promoted the scheming, haughty Haman to rule over his subjects. Haman sought the destruction of the Jewish people and he convinced the King they were different, keeping their own laws and disdaining the laws of the land. An edict was distributed to instruct the king’s governors and satraps to put all the Jews to death – men, women, and children – and to “plunder their goods”.

Esther was seized with deadly anxiety and covered her head with “ashes and dung”. She prayed to the Lord begging that her people would not be delivered into the hands of their enemies and to save them and hear the voice of those in despair and deliver her and her people from the power of the wicked.

Because of her exalted position as Queen, she was given the frightful responsibility of delivering her people from their terrible fate by personally appealing to the King. She sent word to the Jews to  fast and refrain from eating and drinking, night and day, for three days. We all know the joyous end of the story with the bitter enemy of the Jews, Haman, hanged and the Jews’ leader Mordecai, Esther’s guardian, raised up to the highest level of government,  second only to the King.

Is this not such a time today when our citizenry, especially Christians, find America terribly divided, confused, and fearful that our nation will be given over to dishonest, corrupt leaders who will destroy our Christian patrimony, erode our civil and religious liberties, and elevate unjust judges to rule over us?

Dear friends, like Esther and her people, it is time for us to go into deep prayer as we approach early voting, beginning tomorrow, October 24th, until election day, November 8th. Let us dedicate more time to praying for our nation, our future leaders, and the American electorate, especially for wisdom and a clear understanding among the Catholic faithful of the non-negotiable moral principles which should guide us all.

We cannot vote for political parties but for individual candidates whose voting records and values are close to or in accord with our Catholic principles. We cannot vote for political candidates who promote and support abortion, euthanasia, human embryonic experimentation and cloning, same sex “marriage”, who will deprive us of our religious liberties.  When  two candidates are not clearly aligned with our moral ethics, vote for the candidates  who will limit the evil in their role as executive, legislative, or judicial officials.

As Judith enjoined the Jews to fast and pray to save their people, should we not do the same and dedicate our time to save our nation that the Almighty God may “remember his people and vindicate His inheritance”? (Esther 10:12) Pray and fast as best as you can the first three days of early voting (Monday-Wednesday, October 24-26). Bread and water for three days; at most, one meal a day; and daily Mass.

On October 28th we will be honored with the visitation of the Silver Rose at Our Lady of the Atonement Church. The Silver Rose is an emblem of the mission of the Knights of Columbus to foster unity among our nations in the American hemisphere, particularly Canada, the U.S., and Mexico, and to advance the culture of life within our nations and hemisphere.

We will come together for a prayer service from 1:00 pm to 8:00 pm, Friday, October 28th before the main altar at Our Lady of the Atonement to pray for unity and brotherhood between our nations, for the sanctity of life, and for all our American states and citizens using the Silver Rose prayer booklet and patriotic rosary as our aid. Please join us for a rosary, for an hour,  or stay for  the whole service.

When the righteous cry for help, the Lord hears, and delivers them out of all their troubles. Blessed is the nation whose God is the Lord, the people whom he has chosen as His heritage. (Ps. 34:17, Ps. 33:12)