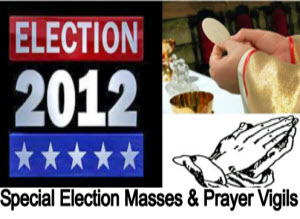 We’re down to the last week before the elections. As you know there is much at stake in this national election. Our economy is in shambles and we are sliding closer towards a fiscal cliff. Millions of Americans are out of work or underemployed. The American dream seems almost as distant for many young Americans as at the time of the Great Depression.

President Obama has waged a relentless war on the moral values people of faith in America hold dear. He has taken dead aim at the Catholic Church in mandating that church organizations supply benefits which we hold to be morally reprehensible and against the universal teaching of the Church.  Rather than defend the Defense of Marriage Act signed into federal law by Bill Clinton in 1996, President Obama violated his oath to defend the laws of the land when he attacked DOMA in court and reversed his position on marriage this past May, coming out in full support of homosexual “marriage”. He has protected and defended Planned Parenthood, the largest abortion provider in America, from cuts in tax-payer funding at the federal and state levels. He insulted Christians who represent 78% of the U.S. population in 2006 by declaring that America is no longer a Christian nation.

President Obama’s re-election will result in all-out attacks on our religious liberties, on traditional marriage, and the pro-life movement’s efforts in the formidable battle to restrict legal abortion as federal law. He will not be restrained in his second term. There are four Supreme Court justices in their mid-to-late 70s. It is likely in the course of the next four years, one or two more Supreme Court justices will be nominated and will sit on the High Court for the next thirty to forty years. Obama administration nominees will surely be picked to defend legalized abortion and homosexual rights.

Out of 49 Democratic Party candidates on the Bexar County voter ballot this November, 39 sought out
the support and endorsement of the Stonewall Democrats of San Antonio (SDSA), a homosexual rights activist organization whose primary mission is to ensure that homosexual “marriage” becomes the law of the land.  All but one of the judicial candidates running on the Democratic Party ticket who are on the Bexar County ballot  sought out SDSA endorsements.

There are currently six states plus Washington, D.C. that have legalized homosexual “marriage”. All have done so through court decisions and legislative fiat, none by popular vote.  The judiciary is critical as a bulwark against attacks on our Judeo-Christian heritage. We cannot allow activist judges whose spiritual and moral lives are incoherent and disconnected to rule over us. Three states have referenda in the November elections to legalize same sex “marriage”: Maryland, Maine, and Washington State. Over the next few years, depending on which party rules or dominates in the Executive and Legislative and Judicial branches of the federal government, the destruction of traditional marriage as ordained by Almighty God from the beginning of civilization will be a reality.

Good News!
The local races in Bexar County are very close. Judging from the early voter turnout through October 29th, Republicans are pulling the lever in greater numbers for conservative candidates. Believe it or not, redistricting did some good for our cause!

What more can we do?
We’ve done a lot this election season. Now it’s time to get on our knees to storm Heaven like we’ve never done before. We are organizing special Masses and prayer vigils this week through Election. Please participate as much as you can with your families. For details, see the flyerof the special Masses and vigils.

At this point, only 25% of Bexar County registered voters have voted early. That’s 220,000 out of 875,600 voters. We must still try to reach as many voters as we can before November 6th. The TLC Voter Guide
will be published in 125,000 newspaper copies going to 500 commercial locations all over the city on Friday, November 2nd. We could use some financial assistance to pay the bills. Candidates have been
requesting some financial assistance for a last week direct mailing. Col. Robert Casias needs $2,000 to
send out one last targeted mailing. Other candidates are tapped out as well.

Can you help by sacrificially donating $25, $35, $50 or more? We will make sure all the donations are disbursed as quickly as possible (there isn’t much time left) to help the candidates most in need. Click on the donate button below which will take you directly to the online TLC-IPA donation page (checks and credit card accepted).

THANK YOU FOR YOUR FAITHFULNESS TO OUR HOLY MOTHER CHURCH!

May God bless  you,