How They Love One Another
A Movie Review of Paul, Apostle of Christ 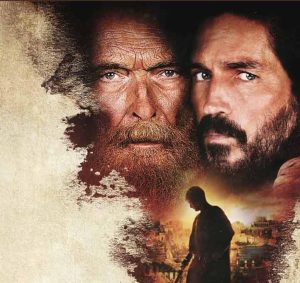 “See, they say, how they love one another … how they are ready even to die for one another, for they themselves will sooner [be] put to death.” This was recorded not in Scripture but attributed to the second century writer, Tertullian, the pagan son of a centurion who converted to the Christian faith. Tertullian became convinced it was the true faith after witnessing the love and courage shown by Christian martyrs. This could very well be the theme of the new movie about the great apostle Paul and his biographer and author of the third Gospel, the Greek physician Luke from Antioch, who recorded Paul’s missionary travels and later his Roman imprisonment in the Acts of the Apostles.

The opening scene of the movie is a rather dark street or passageway Luke is navigating on his way to visit Paul the Apostle who’s locked up in a Roman dungeon. On both sides of the street above his head on wooden crossbeams are burning bodies of Christians set ablaze by Nero’s soldiers, scapegoats for the burnt out city that was blamed on the Christian citizens by the murderous, deviant emperor.

Paul is imprisoned in a lower dungeon cell in Rome’s Mamertine Prison near the Capotoline Hill in ancient Rome. There were no windows in his cell, only subdued light from oil-soaked torches illuminated the room. Mamertine was used by Roman authorities as a jail or holding cell for brief periods and as a site for executions. Reference

Upon the completion of his third missionary journey, during his fifth and final visit to Jerusalem, he was savagely attacked, beaten, and in danger of being ripped to shreds by an angry mob whipped up by the Jews of Asia who were plotting to kill Paul. (Acts 23:12-15) After two years of incarceration and numerous interrogations by Roman officials, responding to false accusations of the Jewish leaders, rather than submit to be tried and murdered in Jerusalem, after repeatedly declaring his innocence, Paul appealed to Porcius Festus, the procurator and Governor of Judea, to send him to Rome to be tried by the Emperor which was his right as a Roman citizen. Festus agreed and answered, “You have appealed to Caesar; to Caesar you shall go.” (Ibid.,25:12)

After numerous floggings, beatings, incarcerations, stoning, and shipwrecks, off went the apostle who was confronted with another shipwreck and several years of delays before arriving in Rome, his final destination and place of martyrdom. He arrived in Rome in 60 AD (est.) where he was again imprisoned for a number of years before his beheading.

The main character in the movie, Paul, Apostle of Christ, was played by English actor James Faulkner, known for his velvety voice. Faulkner said in a recent interview that “I was unaware of what his sufferings might have been in prison … All around us people are still persecuted for their faith. It’s happening now. It’s happening increasingly in the last few years … I feel this is an important film. I feel it is very important to reaffirm the Christian faith at this time, to re-engender the respect for it. I’m tired of the church being denounced and other faiths being preferred and their supremacy echoed. That’s why I did the film.”

The Gospel writer, Luke, stayed with Paul and recorded his “memoirs” up to the apostle’s martyrdom but did not complete in his narrative in the Acts of the Apostles the culmination of Paul’s epic story, his execution. Four of Paul’s letters was included in the canon of the Bible distinguished as the “captivity epistles” – Ephesians, Colossians, Philippians, and Philemon. They were written when Paul was imprisoned  but not exclusively during the time he spent in Rome which was the subject of the movie. Paul refers to his imprisonment in these four letters (Phil. 1:7, 12-17; Eph. 3:1, 4;1,6:20; Col. 4:3, 10, 18; Philem. 9, 13, 23)

Jim Caviezel who played the gospel writer, Luke, in the movie said in a recent interview that he couldn’t get a job in Hollywood after his portrayal of Christ in the Passion of the Christ. “Being a Christian is not easy,” he reflected.  “In fact it’s a hard path to follow.” He said the characters in the movie were strong but the words of Paul were stronger. Caviezel called attention to his portrayal of Christ and Faulkner of Paul. Faulkner had said that Paul played him; he didn’t play Paul. Both actors stepped aside in playing these remarkable roles to embody the persons of Christ (in  the Passion), Paul, and Luke.

Raymond Arroyo of EWTN who interviewed Caviezel talked about the terror depicted in the movie that Christians were going through during the reign of Nero. Caviezel related his experience during shooting the Passion, freezing during the scenes on the cross, when he suffered from a shoulder separation, hypothermia, pneumonia, a lung infection and was on all kinds of medication. “I felt something so powerful, my heart was burning … and I miss it. I felt Heaven in my heart … after the movie was over where I had to have open heart surgery, being struck by lightning … I never felt abandoned. I felt He was there with me… and I want people to know that.”

Without disclosing details of the movie script, the Christ-like character of Paul shone through during the scene when some of the impassioned young Christian men sought revenge for the martyrdom of a young courageous boy who was a disciple and follower of the Way, members of the nascent Christian sect. (Acts 9.2) Paul, vehemently opposed any violence, for in his words, violence must be repaid by love. “Love bears all things… endures all things.” (1 Cor. 13:7) Love overcomes all.

The last scene is poignant and endearing with a scene of the recently martyred Paul appearing in a beautiful field in Heaven welcomed with open arms by the proto-martyr Stephen whose stoning and death was consented to and approved by the young rabbi Saul who “laid waste the church, and entering house after house, he dragged off men and women and committed them to prison.” (Acts 8:3)

I highly recommend this movie to everyone in the family as one of the best movies of 2018. The script develops well the relationship of the main protagonists, Paul and Luke, especially the magnanimous character of Paul, the great preacher of the New Testament, apostle to the Gentiles, who rejoiced in his suffering and in his flesh who completed “what is lacking in Christ’s afflictions for the sake of His body, that is, the church” (Col. 1:24), whose bountiful teachings were second in power and grandeur only to the Lord and Savior he loved so and then followed to his death.